On October 20th, five members of the Model United Nation (MUN)'s club, Mika Baczewski (9b), Mae Hinck (9b), Anne Kubo (11a), Mio Richter (9a), and I participated in the Seisen MUN (SISMUN) simulation conference. This MUN conference was based on game theory and simulated the negotiations which led to the Iranian nuclear program in 2015.

Game theory is the study of how and why people make rational decisions based on variables of outcomes from a series of personal choices. It addresses games, in which one person`s gains result in losses for other participants.

The simulation at the MUN conference contained two games: the main and the national game. The main game simulated the international negotiations about the Iranian nuclear facilities and the possibility of a secret nuclear weapons program among the following eight nations plus one political party: China, France, Iran, Israel, Japan, Russia, the UK, the US, and Hezbollah. The goal of this game was to find the most reasonable deal from the participating countries, and each proposal was evaluated by the governments of the United States, Iran, and Israel. In contrast, the national game simulated the conflicts inside each participating nation. In this game, each government played against their internal opposition. The goal of this game was to find an agreeable proposal to solve their conflict between the government and the opposition, and the solution was decided by the opposition. Both games were played based on game theory. We, the participants, were given 15 to 16 possibilities of outcomes to choose from depending on how the individual countries selected from the combination of given variables. Each outcome carried its own amount of points, which were not revealed until the end of the entire game. While we went through the games by making choices of these outcomes, we accumulated each point to achieve the final score. As a consequence, a country with the highest score won the game.

There were six participating international schools in the conference: American School in Japan, Seisen International School, Saint-Mary`s International School, UWC ISAK Japan, International School of Sacred Hearts, and DSTY. Delegates from each school were assigned to become prominent government officials and business associates of each country. We, the DSTY team, were designated for the UK and the US. Each country was given its own room to discuss their strategies. We were able to visit other countries and negotiate to try gaining maximum points for our own country by influencing their opinions. We were also allowed to bribe, fool and lie to others and even given paper slips with false information to trick each other`s mind. However, after the all-day event, Russia beat the rest of the countries and became the winner.

We had a great time meeting with delegates from other international schools and working together for the same goal. It was also exciting to get to play famous figures in the world even if only for one day! 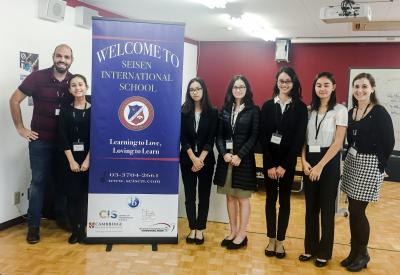